No, that’s not a real word. But last week, certain currents in my thinking converged, all having to do with maps and oceans. On Saturday, we dropped our daughter off at the Charlottesville train station then headed over to Chroma Projects to see a show by an old friend and collaborator, Carolyn Capps, called “Deep Sea Calculations”: 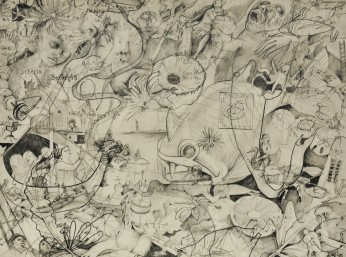 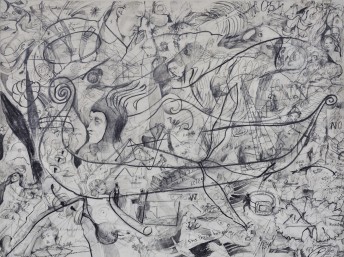 These pieces owe a lot to old-fashioned illustrated maps, but in a way they chart the mind, too–they’re process drawings, in which one image inspires the next in visual/verbal association. I was at the same time preparing to teach Ocean Vuong’s 2016 debut collection, Night Sky With Exit Wounds, a collection I find attractive but sometimes opaque. The book, reflecting on Vuong’s immigration from Vietnam to the U.S. and a family history of domestic assault, is full of thresholds crossed in violence. In sex, too. He registers a New York School influence through all those curly ampersands and via talky, sexy meditations like “Notebook Fragments,” but Vuong also deploys persona poems, footnoted blank spaces, punctuation experiments, perhaps the shortest “About the Author” page ever–in short, a host of strategies that occlude the poet’s presence.

During our first class session, we focused on the almost-title-track, “Self-Portrait as Exit Wounds,” a poem I found intensely mysterious until I happened upon his published note about it (press “more” at the poets.org link). It helps to know that this poem’s perspective follows the trajectory of a bullet, even though the missile’s path transgresses the law of physics, crossing decades as well as geography. It’s a beautiful and disturbing piece, but my class couldn’t make much sense of the ending. How can the “I” lower himself “between the sights” of the gun? Vuong is identifying with both shooter and target for reasons the rest of the book makes clear, yet none of us could see the final image of the “self-portrait.” I confess I was hoping the hunters in the room could explain something about rifles I was missing, but they shook their heads. Usually when I bring a problem to a roomful of smart English majors, we figure it out together, but none of our readings were satisfying to me–except the general one suggested by the phrase “exit wounds,” that this book is a chronicle of absence and damage.

Sometimes you reread a book of poems and it all comes clear; other times it turns to mist in your hands. So for the second session, I deployed a teaching strategy chronicled here: asking students to produce a one-page visual representation of the volume. What else, I wondered, were my students seeing and not seeing, as they charted paths through all the lovely words?

One student, Bailey Brilley, reinvented the cover. The images 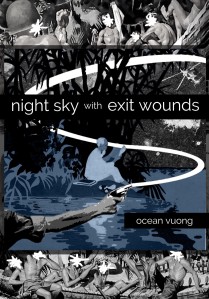 he photoshopped together include an aerial photo of a Vietnam bomb field, a propaganda poster by a Cuban artist, a Pulitzer-prize winning photo of a Vietnamese man’s execution (the arm and gun), and WWII-era beach towel ads depicting troops in the South Pacific. 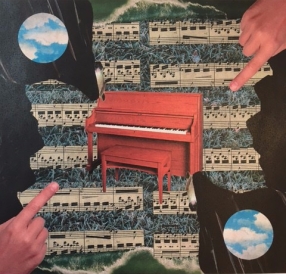 oem, “Queen Under the Hill.” Thomas Ferguson tracked references to hands and aligned them to illuminate their associations with intimacy and violence. 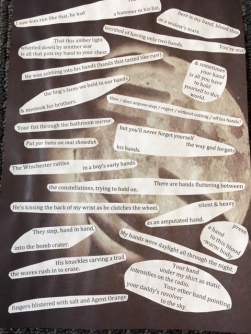 Charlotte Doran found images and articles about the war and the fall of Saigon, streaming “White Christmas” across them as Vuong does, verbally, in “Aubade with Burning City.” Rosy-fingered dawn, and all. These visual and emotional engagements with the poems seem an especially apt way to handle poems that resist rational schema. 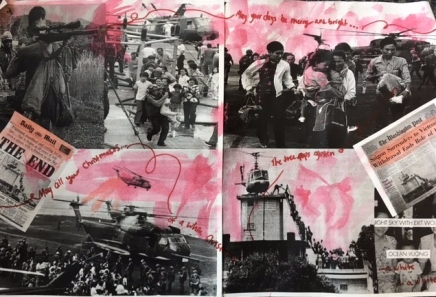 And tomorrow, we all talk to Ann Fisher-Wirth and Laura-Gray Street before their public reading–mappers of the ecopoetry’s territory, plus Ann is the author of one of my favorite long poems, Carta Marina, inspired by a phantasmagoric old woodcut-printed map that puts me in mind of Carolyn’s drawings again. And so we sail to the edge of winter term, to tell stories about where we’ve been.

← Poetry at the Border 2: Cynthia Hogue
The thing about April →

Follow this blog
if(typeof(networkedblogs)=="undefined"){networkedblogs = {};networkedblogs.blogId=1171168;networkedblogs.shortName="the-cave-the-hive";}
Took Cam back to college via Washington DC. He LOVES Haverford and is thrilled to be back; I miss him already

Little flecks of inspiration and creativity