Last Monday, I found a KKK recruitment flier on my front lawn. Just a week or so earlier and a few blocks away, the first physical memorial to enslaved African-Americans was 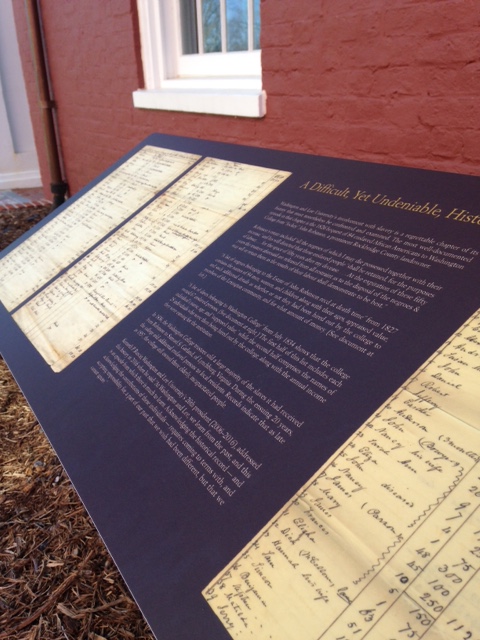 installed at Washington and Lee University, an institution that benefited financially from slavery but, until recently, bruited that terrible fact much less than, say, its debt to certain slave-holding generals. (See this post from last
year on a virtual memorial that, for me, marked the beginning of a better-informed conversation.)

I find myself trying to draw a line between those two opposing gestures, the plaque to honor the dead and the dishonorable flier. Maybe my sense of meaningful patterns is just a poet’s delusion.

The flier was one of many found in my neighborhood. It was protected from rain by a plastic baggie and weighted with a handful of rice. (White rice, and yes, I’m working on a poem with that title.) My more immediate media responsibilities, however, were to fire off a letter to the local paper and alert the police. Before that, like a real twenty-first-century American, I posted a query on Facebook, wondering how to respond given that the terrorist literature was probably legal–the threat of violence is latent, all right, but the flier doesn’t overtly advocate physical harm to others. The picture of a broad-shouldered, masked, accusatory Klansman carries a frightening charge, as do the all-caps format and the hateful associations of the initials themselves, as well as the not-so-metaphorical phrases “White Power” and “Join the Fight.” The flier certainly scared me; I went inside and locked the doors. But the organization itself is legal, and the politics it advocates are too, despite the KKK’s history of atrocities.

It was interesting how people responded via social media. Many recommended I contact the Southern Poverty Law Center (they never returned my call 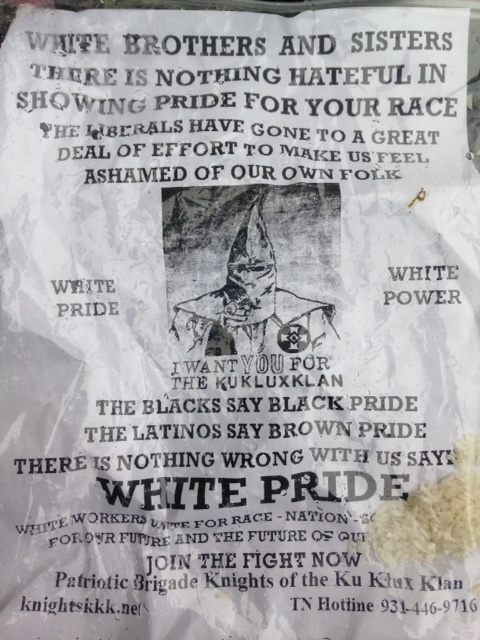 but I know other locals had already reported the fliers there). I learned that one local trigger for this flier-bombing was a day of memorial services for the Rev. LaVert Taylor, a black Civil Rights activist. But it’s not just a local thing, and in fact, friends reported similar recruitment efforts in other parts of the country. A certain Republican front-runner is, through toxic rhetoric, empowering white supremacists and other haters to come out swinging, everywhere. The state of U.S. politics, at the national level, is just dire beyond belief.

I’ve since given the flier to a student journalist trying to report the larger story, and there’s a rally against racism arranged for this Monday at 5 pm in Lexington’s Hopkins Green. So maybe this abhorrent attempt to rouse “white pride” is a wake-up call of a useful variety. And I look forward to the dedication ceremony for W&L’s memorial, at 4:30 pm on April 5th, around the side of Robinson Hall (though that back-door location does make me wince–I hope there will be a lot more remembering in the next few years, much of it front-and-center).

When another FB friend, a psychiatrist, said he hoped the flier was an “extinction burst,” I got excited, realizing what the term must mean. When a conditioned behavior stops receiving the expected reward, it gradually dies out–but before it decreases, instances of the undesired behavior might increase for a while. I’m glad to have an official-sounding shorthand for a phenomenon I’ve observed. Does this surge of KKK malevolence represent desperate flailing of a group about to shrink right out of existence? I like that idea, but am not counting on it.

I see a lot of racism, sexism, homophobia, and other prejudice in daily life, but those biases are less socially acceptable now than in my childhood, or than they were in the 90s, at the beginning of my teaching career. My first-hand experiences of prejudice involve not racism but sexism, sometimes vicious and sometimes quietly insidious. I’ve been discriminated against, harassed, and assaulted. But I have many more opportunities than my mother did, and my daughter lives in a freer world than I knew at 19–and maybe all 3 of us will be able to vote for a female presidential candidate this fall, a development that has been absurdly long in coming. It’s obvious that the revolutionary reality of an African-American president and the possibility of a female one have created a lot of backlash. The whole Drumpf-o-rama extravanganza of the last few months, including the poisonous trash I found by my doorstep, could be a sort of final or near-final tantrum of some ancient varieties of stupid.

I don’t actually believe racism’s on its way out, rationally, or sexism, for that matter. If recent eruptions constitute an extinction burst, it’s extinction on a glacial time-frame, with many more explosions of hatefulness still to come. My seasonally recurrent hope for us all, though, isn’t entirely irrational, either. The Darth Cheneys, Grand Dragons, and other super-villains of this all-too-real world are getting pretty creaky in their cyborg parts. They won’t be pulling puppet-strings forever. And I don’t think this W&L memorial, small and belated as it is, could have gone up twenty years ago.  We haven’t made nearly enough progress, and making any gains at all seems incredibly, insanely, criminally difficult, yet I’ve seen growth happen. Happy spring equinox, friends. Imperfect closure, I know, but I’ll keep trying to rhyme with it. 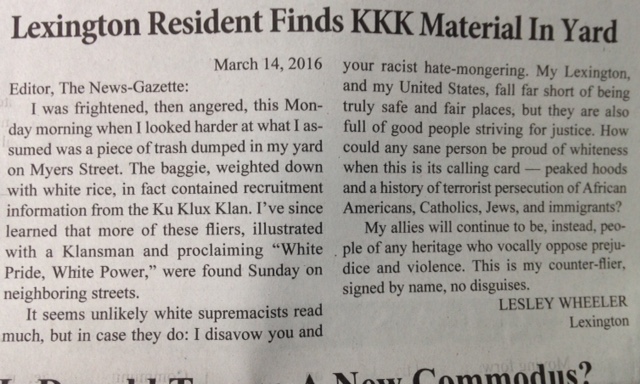 Follow this blog
if(typeof(networkedblogs)=="undefined"){networkedblogs = {};networkedblogs.blogId=1171168;networkedblogs.shortName="the-cave-the-hive";}
Watching spring unfold on weekly visits to the Blue Ridge, where social distancing is nicer than elsewhere