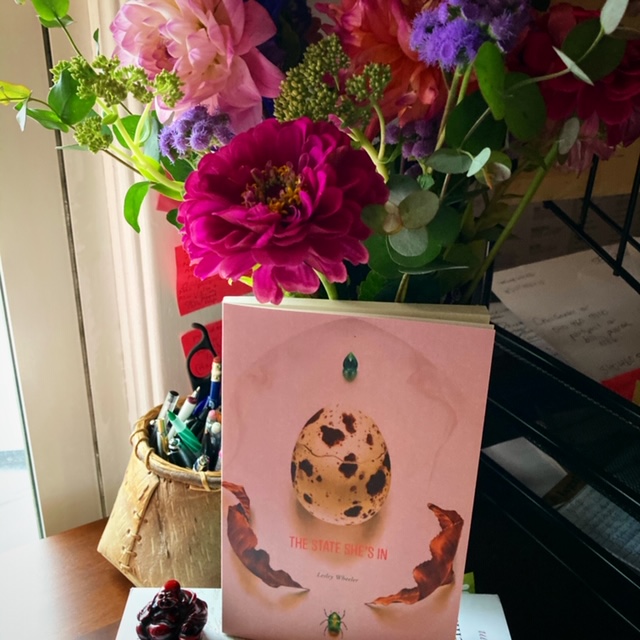 I recently ordered a 2021 calendar–I favor a portable Moleskine number–but, with heavy-handed symbolism, the order keeps being delayed. I’m a planner by temperament and I SO wish I could anticipate my future doings again. Not possible. It’s all clouds.

For the near term, all a calendar-minded person can do is brainstorm short-term ways to mark the passage of time, because around here, the cooling air and spots of yellow at the tops of trees strongly imply that the fall equinox is near. I keep daily work rhythms, even on sabbatical. On Saturdays, we take walks somewhere outside of this small town, hiking in the woods if we can. I’m applying for writing-related opportunities that might bear fruit next spring or summer. Other people are desperately trying to layer multiple workdays on top of each other right now–work, homeschooling, other responsibilities–so feeling lost in blurry weeks means I’m getting off easy, but to a surprising degree, it’s still a stressor.

Here’s a small anniversary: my fifth poetry collection, The State She’s In, was published on March 17th, 2020, so if it were a baby, it would be a chubby little person rocking forward onto its hands and trying to figure out locomotion. I bought it flowers and arranged a photo shoot to celebrate the occasion. It actually IS a book about time, among other subjects–the history of my region but also the approach and arrival of my 50th birthday, an event that I could watch descending like Wile E. Coyote awaiting the anvil. Processing age and change, I wrote many poems that reference the dreaded number explicitly (as in “Fifty-Fifty”) or use 50 as a formal constraint: poems of 50 syllables, 50 words, 50 lines, and more. I’m sure much of that formal play is invisible. It worked, though. Attacking a number every which way gave me some control over its meaning. I wonder if I could do some version of that by writing poems about 2021? I refuse to give 2020 that honor.

Here’s the last poem in the book, published in Gettysburg Review but never online. “L” was a title I contemplated for the whole book (50, Lesley, Lexington); for this particular piece I researched events that happened in 1967, my birth year, as well as having a conversation about ambition with the mountain that looms over my town. The weirdest thing about the poem, though, is that all of its 50 lines are 50 characters long–a persnickety constraint you can’t even see without using a monospace font, which neither the magazine nor the book does. I might always have to hedge optimistic claims like “I’ve stopped counting”–nope, haven’t yet!–but that’s one of my aspirations, to let go of measure and comparison. To “avoid mirrors except the page” and spend these blurry days as best I can because everything ends sometime and I can’t, in fact, control when that is.

← Hope, in spite of and because of
Short-lined sonnets →