In the early nineties, I was lucky enough to hear Toni Morrison introduce a reading by Maxine Hong Kingston. Both of them had recently lost manuscripts and many other precious belongings in house fires, and Kingston read a riveting piece about driving toward her neighborhood that day and realizing her home was ablaze. It became part of The Fifth Book of Peace; the burned manuscript was The Fourth Book of Peace, Kingston’s sequel to three legendary books also destroyed by fire.

It was an astonishing evening, but what recurs to me frequently is Morrison’s introduction, in which she described spending a lot of time on the phone with Kingston. “I only wanted to talk to people whose houses had burned down,” Morrison said.

I’ve been in a version of that space lately, avoiding people with dissimilar views about local and international politics. I know, I know, that’s a bad long-term plan. People have to be able to talk across ideological gaps, blah, blah. Being a teacher means centering your working life around that laudable proposition, but when the news is full of cruel parent-child separations and a crooked president trying to do as much damage to democracy as possible; your neighbors are writing bone-headed letters to the paper; and the local KKK capitalizes on it all by leafleting the town–well, you only want to talk with people whose houses have burned down. I am beyond grateful to a smart and feisty group of local friends who will bring wine to my kitchen and hang out to chat about hate mail, colonoscopies, how Sarah Huckabee Sanders is rather petite in person, and publishing poems about Hillary Clinton’s vagina (they say it needs to be a sequence–a “vagenre”–but we’ll see if I, ahem, have it in me). (And thanks, Rise Up Review! Smart and feisty writers, editors, and publishers who do their good work at a distance from small southern towns are also doing a lot for people’s morale.)

So it’s interesting that friendship conditioned by hateful politics turns out to be central to the writing and research I’m doing. This week I visited Virginia State University to read the papers of Amaza Lee Meredith, an African American artist, architect, and teacher who was a sometime neighbor and longtime friend to the poet Anne Spencer. I leafed through scrapbooks Meredith kept full of letters from students, memorabilia about Spencer, and poems she either copied out or clipped from magazines. She also preserved clippings about a few favorite politicians and a receipt from her $5 donation to Adlai Stevenson’s campaign. Meredith and Spencer were friends during the Jim Crow era and they clearly talked urgently and often about educational inequality and school segregation. I’m not comparing my experiences to theirs–Spencer and Meredith and their families were in physical danger, as well as being subject to daily degradations, because they were black in mid-twentieth-century Virginia–but I think negotiating this political moment is tuning my awareness to aspects of Spencer’s situation.

What sustained Spencer when social injustice and literary rejection demoralized her? Her garden. Reading and writing. And friends like Amaza Lee Meredith, to whom she signed “I love you,” late in life, in a shaky hand. 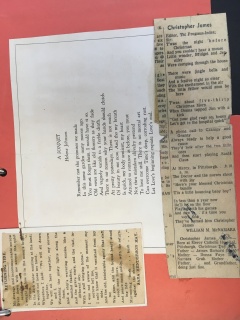 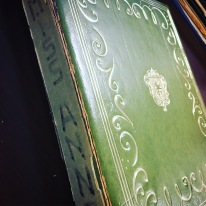 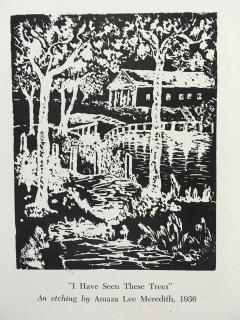 ← Prove or disprove and salvage if possible
Poetry and suspense: more twists →

3 Comments on “Poetry, politics, and friendship”