For the last week, I’ve lived in the land of the long blink. We arrived home eight days ago from the aforementioned intense trip to Europe, and I dutifully took sunlit walks to reset my body clock, swallowed melatonin at the appointed hours, and vigorously swept out my email inbox–begone, reference letters and peer review!–while getting organized for a spousal birthday and our son’s impending six weeks at the Ross Mathematics Program in Ohio.

I was plenty busy, in other words, but not desperately so, and as I ticked off the most urgent tasks, I found myself revving down. You know, my brain said Wednesday morning, before you work on permissions inquiries, there’s this poem idea. And on Friday morning, over breakfast by an open window, Hey, you haven’t taken a three-day weekend just to read and cook and hang out for a long, long time. As I let myself do less, I started getting sleepier and sleepier, “After Apple-Picking” style. The past few nights I’ve been unable to keep my eyes open much past 9 p.m.

My spouse says that I haven’t really exhaled for the last two years and I’m just tired–I should indulge my sleepiness, says the kind unprince. I don’t feel depressed or sick, so I guess he’s right. And it’s a pleasure to continue with the novel-reading I did on various planes and trains in late May. The recent read that’s staying with me most powerfully is Overstory by Richard Powers, in which trees are major characters. I felt artistically irritated a couple of times at polemical passages or how he handled exposition, but at the same time, I’m deeply impressed by the book. It has actually changed my brain–I’m observing landscapes differently. Even watching the last few episodes of a favorite show, The Americans, I kept getting diverted from  human spies doing their dead drops in parks or sitting on benches, becoming lost in admiration of trees that shared the frame. That’s a big accomplishment for a work of fiction, to shift a person’s angle of vision away from human beings toward the more-than-human world.

Now I’m catching up with poetry in books and magazines. The new Ecotone is on my desk and, as always, it’s full of loveliness. It often contains a powerful poem by a writer I’ve never heard of, and this time that’s “Coywolf” by Katie Hartsock. I also especially enjoyed the opening note by Anna Lena Phillips Bell discussing the departure from the magazine of Beth Staples, who will move to this sleepy town come August and take over Shenandoah. I’ll be reading poetry submissions under her editorship and I’m beyond excited about the magazine’s transition. I’m nervous about the workload, too, but my term on AWP ends in October, and being a trustee during that organization’s recent changes has involved plenty of time and worry. I’m eager, at any rate, to spend time in a different region of the po-biz.

The picture below tells you, too, that I’ve been reading a beautiful chap by Sally Rosen Kindred, who often works at the fringes of dream and fairy tale, from Porkbelly Press. In Says the Forest to the Girl, Sleeping Beauty is a recurring character, and sleep can be a dangerous condition–a response to trauma that, by hushing struggle, puts you at risk again–but also forest-like in a good way, a zone of growth and strange associations. From “Sleeping Beauty Says Goodnight to Little Red”:  “A lullaby is a broken cup waiting to slice your lip.// Close your eyes, hope for a hundred years.”

Personally, I’d rather enjoy a solid eight hours, stop yawning, and get back into summer writing now. I’m not a princess or even a girl, and I’ve got uses for daylight. But what the body says to the poet deserves attention, too. 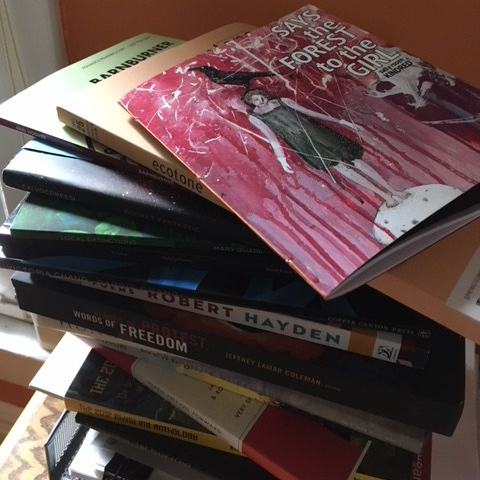