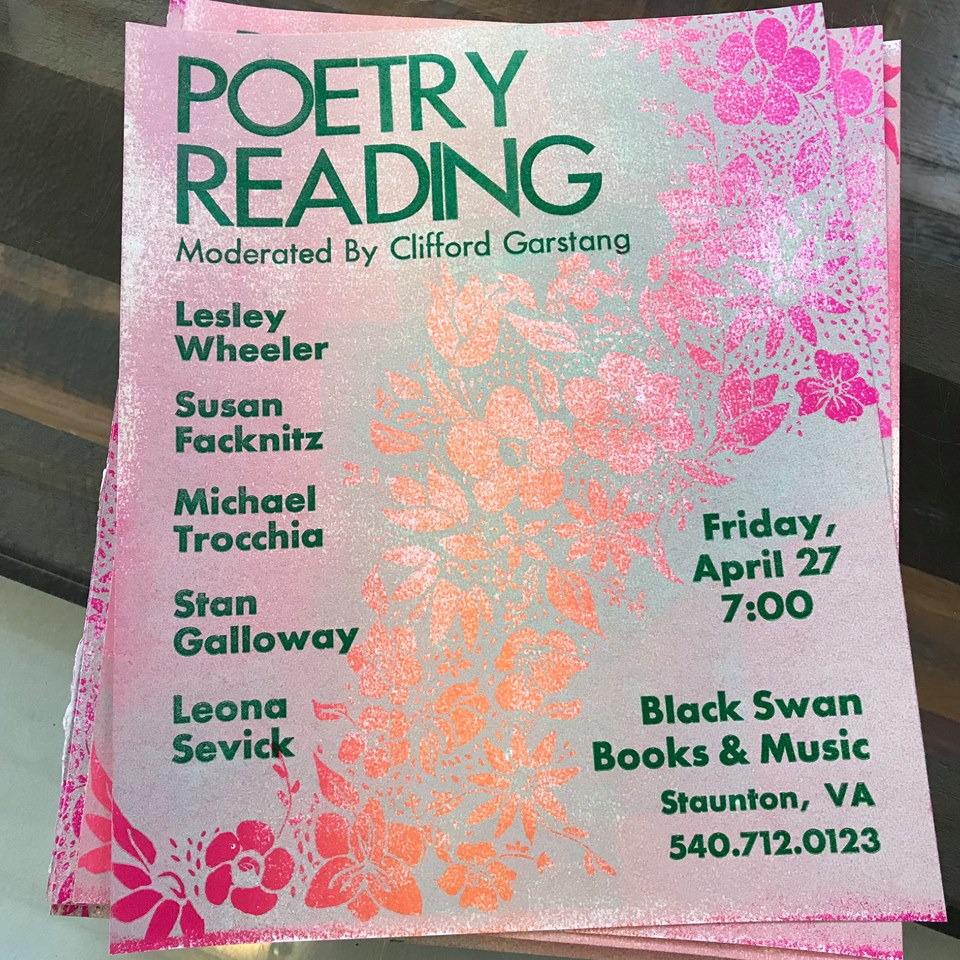 Spring’s been happening in fits and starts–blossoms one minute, wind-strewn petals the next. I walk a nearby trail most mornings, and on Tuesday, Woods Creek churned and roared from heavy rains; parts of the path were massive puddles, and the lowest bridge was half-underwater. The next day was frigid; others have been balmy and still. National Poetry Month basically occurs during the year’s moody adolescence.

I’ve been just as inconsistent. Every April since 2013 I’ve tried to have some kind of daily poetry-related practice. In 2013, I was pent-up and just exploded in daily drafts. In 2014, I wrote a section of a long poem every day according to Vladimir Propp’s numbered phases of folk tales, and that became last year’s chapbook, Propagation. In 2015 I worked on poems in response to images by Carolyn Capps, and that collaboration became an exhibit. In the Aprils since then, I haven’t been as focused, but tried at least to work on poetry every day, often by drafting something new, sometimes by revising or submitting work. This year, it’s been really, really hard, and I’m not sure why.

I do know my monkey mind has been up to serious mischief, in part because I had a very intense winter term, working round the clock just to stay afloat (around here, the twelve-week “winter” term ends the last week of April, and the four-week intensive spring term begins tomorrow–oy). I don’t know if this is a symptom or a driver of my stress, but I have noticed my reading patterns changing dramatically. I’m normally a hungry novel-reader, averaging one a week on top of classwork, and that’s supplemented by fairly heavy poetry reading and a lot of journalism and magazines. I keep a list of the books I finish, in part so I don’t draw a total blank if asked to write a year-end column somewhere. There’s usually a balance among genres in my novel consumption, depending on time of year and state of mind, including challenging literary stuff, pulpy mysteries, and a good share of speculative fiction.

This year, since January 1, I’ve finished just three novels. That seems demented to me. I’ve been sustained by partial residence in fictional universes since early childhood, because this world kind of sucks, even for a person like me whose life has been pretty lucky. I can and do read lots of short-form stuff, including many poetry books, some by our first Glasgow Writer in Residence, Luisa Igloria, who’s settling in now to teach an advanced seminar on hybrid genres. Right now I’m in the middle of Beth Ann Fennelly’s micro-memoir collection Heating and Cooling. I also watch various novelistic TV series. But my lifelong drive towards narrative immersion in long fiction just seems broken. I’m not sure whether to nudge myself back into the old reading patterns, which I’ve always found calming, or just let the monkey mind swing how it wants to.

So far, I’ve been doing the latter, both in my reading and my NaPoWriMo practice. I sent a bunch of work out, and received a quick acceptance and a quick rejection; the other poems wait for editors to have opinions about them. I think I’ve drafted a couple of poems that will be keepers. I’ve also written poems about being too discouraged to write poems. I’ve been collaborating with my spouse on some visual poems here and there, and I also spent much of this week, our spring break, revising my own novel, because I received some helpful feedback and that’s what I wanted to do. Perverse, but so be it. The very best thing I did for myself, poetry-wise, was join a group of women poets just sending their daily drafts to each other for the month of April, with no apologies and no judgments. It’s felt like everything I love about poetry, with none of the striving–what a blessing.

On a probably related note: last weekend was the first time I  completely broke my commitment to blog something poetry-related weekly in 2018. This vow was in response to a challenge Kelli Russell Agodon and Donna Vorreyer leveled in December–see Donna’s awesome list of participants here–and has been facilitated by the great gift of Dave Bonta’s weekly roundups (most recent one here). I realized Monday morning I hadn’t posted anything and thought, well, damn. Then I decided I’d rather spend a few more hours on poetry subs, then work on the novel. It was good to prove to myself that I could focus immersively on something.

And now it’s back to running at top speed, with a seminar on African American poetry starting tomorrow. On the creative community front, I’m also also looking forward to a reading at 7 pm this Friday, April 27th, in Staunton, at the Black Swan. And I’m SO grateful to Gettysburg Review for including my poem “L” in its pages–that’s my poem about turning 50, in 50 50-character lines, which I drafted at 47 because I like to plan my crises in advance. An ambitious poem about the problems with ambition, it felt like a turning point for me and I’m so glad it found a good home–confirmation that springs of moody weather can, in the long run, bear fruit. 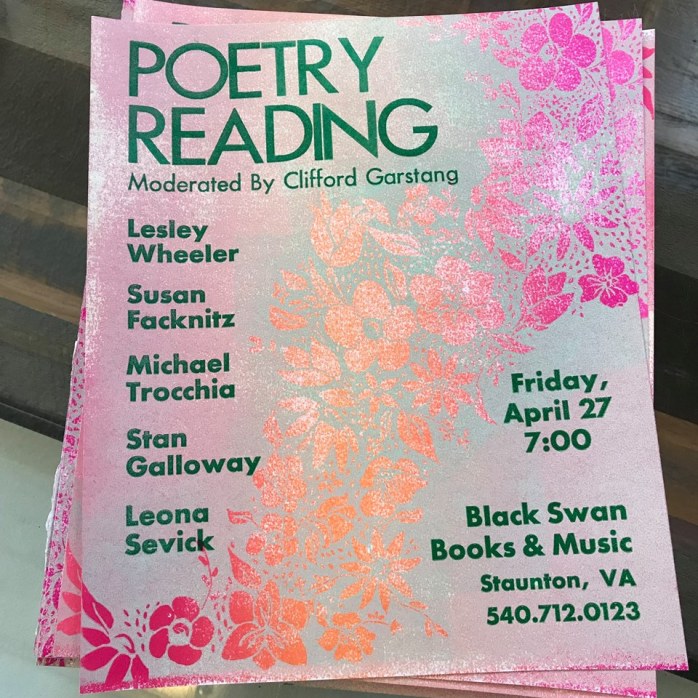 Follow this blog
if(typeof(networkedblogs)=="undefined"){networkedblogs = {};networkedblogs.blogId=1171168;networkedblogs.shortName="the-cave-the-hive";}
Not the ACTUAL cover of my new book but one @chrisgavaler made for fun as I was redrafting the novel. Same #Audubon cross-fox designer Kath Wilham ended up working with though