Small amid the sparkle 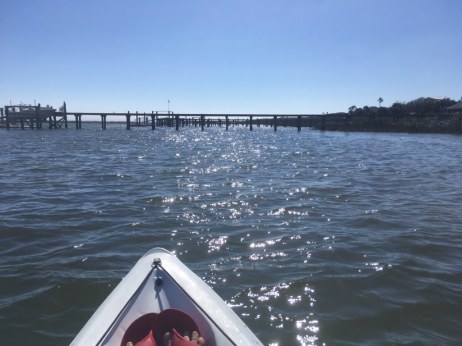 Is that a cormorant on that piling near St. Augustine, Florida, drying its wings? Because all the poets at the AWP convention in Tampa the week after next will look comparably, awkwardly exhibitionistic. Yo! I’m not totally unimposing! Come buy my book!

Including me, of course. I’ll be carrying around copies of my new chapbook, Propagation, for sale ($5) or trade (I like books, dark chocolate, and flattery). I’m already feeling goofy about it. I’m also delighted to be participating (briefly) at the Black Earth Institute Reading on March 8th at 4 pm in the Attic Cafe on Kennedy. Otherwise, I’ll mostly be conducting AWP Board duties: attending the board meeting all day Wednesday and the Awards Celebration Benefit that evening; speaking at the program directors’ plenaries Thursday morning; thanking bookfair participants and doing bookfair office hours; introducing the introducers and taking speakers to dinner. This is all a privilege, plus it’s my last year as Mid-Atlantic Regional Chair so I need to savor the fun bits, but I will feel some relief when it’s behind me.

I’m struggling to stay zen this weekend, with a larger world in bloody shambles and my own life as busy as I can handle. Last weekend was W&L’s weeklong midterm break, which we kicked off with a wonderful three nights at the beach followed by hunkering down to catch up on work, most seriously starting Thursday, when my son embarked for the Model UN in Chapel Hill. As usual, I was partly successful. I finished grading, but more comes in tomorrow; I’m ready for Monday, but then comes Tuesday; I caught up on revision and submission work, which was good but also reminded me how much work is languishing. I could use good news, but then again, I don’t want to fail to appreciate successes that ARE happening. For instance, 3 years ago (when I was 47, because I’m precocious), I wrote a poem named “L” about ambition on the cusp of age 50. I thought it was especially strong but just couldn’t place it–until last week, when it was snapped up by a journal I greatly admire. Pale rainbows in mist, right? Not world-changing but lovely all the same.

Before I get back to it, huge thanks to Cherry Tree for another great issue, which includes two of my poems in the “Literary Shade” section: a bit of terza rima called “Native Temper” and this sonnet-rant about the KKK flier that landed on my lawn in 2015, weighted down in a baggie by white rice, of all the damn things. I knew before then that I lived and worked at ground zero for what remains of the Confederacy, and everyone could feel the nastiness intensifying as a terrible election approached, but that particular moment remains a watershed for me. May all of us small writers keep boiling for as long as it takes.  I need to believe each grain of good effort adds up, and there will be a tipping point.

8 Comments on “Small amid the sparkle”