I’ve been swimming around in H.D.’s work since my undergraduate years, on the recommendation of the writer I eventually married. I started with her memoirs of Freud and Pound, trekking up to the sunny top floor of the University of Southampton library to find them, then worked backwards to the poetry, which became central to my 1994 dissertation and then my first book, The Poetics of Enclosure. I’m a poetry professor, primarily, with a deep love for lyric and lyric sequences, so most of the H.D. I teach is from the Collected Poems. But it’s been a 21st century thrill to watch a few of her other books come back into print, midwifed by generous H.D. scholars. The latest is the paperback version of By Avon River, scrupulously edited by Lara Vetter (published in 2014 in hardcover, but now an eminently teachable $16.95 paperback, folks!).

The reason I use the word “hybrid”: H.D.’s book, like some proto-crypto-creative-writing-PhD-thesis, consists of three longish Shakespeare-related poems plus an extended prose meditation, full of quotes, about Elizabethan verse. Vetter’s introduction explains the project’s origin in three trips H.D. made from Blitz-ravaged London, at the close of World War II, to Stratford-upon-Avon. The first, on Shakespeare Day 1945, was almost a pilgrimage. As Vetter puts it, “Shakespeare is an icon, standing in for England in times of strife” (26). H.D. loved England and was thrilled to celebrate its survival, along with many other pilgrims, by immersing herself in English art and history. I agree with Vetter, however, that H.D. was far from Bardolatrous. By Avon River represents Shakespeare as a genius but also a poacher, implicated in British imperialist violence. Interestingly, too, Shakespeare is not so central to H.D.’s project as her title might imply. The literary-critical part of the book really concerns not so much Shakespeare as his milieu–less-celebrated poets, some very obscure now. And her poems revolve around a character referenced in The Tempest, Claribel, who never even appears onstage. Shakespeare mentioned her, more or less, and then forgot her.

By Avon River is resonating with me in part because of its hybridity. First published in 1949, the book did well–never a given for H.D.–receiving many laudatory reviews. This makes it an important precursor for later literary experiments. As Vetter argues, and as Cynthia Hogue reiterates in her back-cover endorsement, women writers late in the modernist period deserve more credit for their “hybrid works located at the juncture of personal, national, and nationalist concerns.” Hear, hear. But let me add: trying to publish hybrid work, many decades later, is still awful. I haven’t yet placed my creative- critical ms, Poetry’s Possible Worlds, even editors have praised it to me, and every time I reread it, too, having come to doubt myself, I get convinced all over again that it’s strong work. It’s just in the margins between everyone’s carefully articulated marketing plans.

And that connects to something else I appreciate about By Avon River. I read it as the meditation of an artistically ambitious woman nearing 60 who feels connected to Shakespeare (through bisexuality, among other ways) but knows she is not the Bard, not the poet who most indelibly articulates her time and place, if the 20th century even has one. I’m nearing 50 and while remaining as ambitious for my art as any poet you’ll ever meet, I find myself thinking a lot lately about my own unimportance. That’s not entirely a bad thing. It’s a condition I share, after all, with pretty much every other member of the human race. Sane people, I suspect, keep this demoralizing truth in the back of their minds and just keep trying to do their best work anyway.

H.D. writes of the more than 100 Elizabethan poets and dramatists whose names survive: “Not one is negligible” (76). She quotes their verses admiringly an 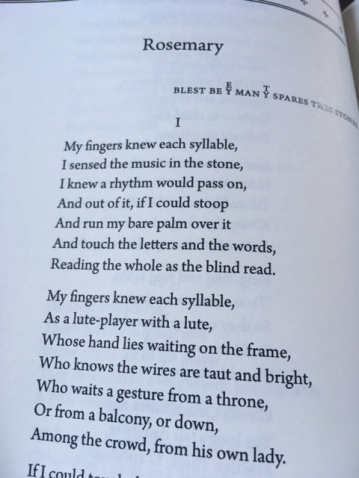 d speculates about their lives, respecting what it means to pen even just one poem that lasts for centuries. Their achievements, she insists, “must not be forgotten” (97). She also writes appreciatively of Shakespeare saying farewell to the court, and his own stature, through The Tempest: “there is no hint of bitterness or rivalry. If he is to be elbowed out, he will at least, give at the last, a demonstration of good manners” (101).

H.D. didn’t know if any of her own work would delight readers in 2017, and none of us knows if it will three centuries from now. In By Avon River, I hear her pondering this unpredictability and deciding she can live with it. All poetic effort matters, in the end, because the many strivers make a few shining successes possible. Besides, she’s on the side of the little guys, having vowed to be one of the historians, one of the rememberers. Bless them all.

I read her focus on Claribel in her lovely verses the same way. Maybe Claribel is not the hero of the drama, but “It is enough,/ I live forever” (61). H.D. knew, likewise, by the mid-forties, that she did have at least a small place in literary history. I personally rate H.D.’s work infinitely beyond footnote-status, but it’s bracing to dip into her thoughts about ambition and history and remember that she was just navigating currents, too, at water-level-perspective. Who knows where any of us will wash up?