Poetry at the Border 2: Cynthia Hogue

Poet and translator Cynthia Hogue on how borders work:

Events today around border issues have brought back personal experience so eerily and uncannily as to seem to me the return of the repressed. The events recounted and per/formed in the excerpted poem that follows, “The Green Card Is Not Green,” happened twelve years ago to my immigrant husband and me, when we were navigating the complicated bureaucracy of post-9/11 legal immigration. I think that more Americans today are aware of the challenges—of late the impossibilities and indignities—of any attempt to immigrate to the U.S., than Americans were so long ago. I, at least—whose first husband had actually been deported for illegally immigrating to the U.S., but courteously, all-but-on the honor code, asked to leave the country at a time of his choosing—had a rude awakening discovering how things had changed in the decades since my first marriage. I naively thought that as an American, I could call Immigration and Naturalization Services (INS) and sort things out. No, indeed. Even for a native English speaker, the new Department of Homeland Security was a maze. I called again and again, only to end up confused and frustrated. My husband could not do it at all because he could not yet understand English spoken by Americans (including naturalized citizens). Or perhaps it was the bureaucratic diction and tone. I’m not sure. He could not understand, and although I am an English professor, I discovered to my shock and horror that I had trouble too.

How in the world could someone who had no translator available, who was coming to the U.S. believing the glossy representations of the freedoms for all purveyed around the world, manage even to receive the information they needed?

The poet of the Southern Border, born on the U.S. side of the Mexican-American border in Nogales, Arizona, Alberto Álvaro Ríos, observes that the border connects as well as separates. The power asserted at borders, however, certainly at U.S. borders today, tries to stabilize identities into “us” and “them,” and to separate off those who are categorized as “them” in order to impose an order and even a uniformity on those who are categorized as “us.” But as my poem tries to explore, borders are artificial and identities are nothing if not fluid at borders, which expose that fluidity as well as try to impose labels. Borders destructure “us” and all that tries to bestow order and clarity, exposing how disorder borders order. Borders are liminal zones, literally betwixt and between categories. In the terrain of suddenly visible edges and interfaces, the speaker of this poem issues a critical re-characterization of the newly marshaled, militarized border that the State, our State, had created. The State discovered all those years ago that borders disorder order, to invoke a poem by Harryette Mullen. The American citizen wife I was twelve years ago trusts that all the imperial will being marshaled to close U.S. borders will be similarly disordered, frustrated, enacting re-visionary connections it could not imagine were possible (because the imperial will lacks imagination) and did not intend (because, although authoritarian, it is blind).

Cynthia_The Green Card Is Not Green (003) 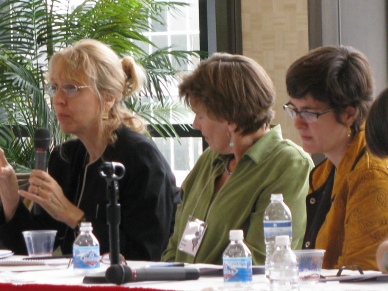 The attached excerpt of “The Green Card is Not Green” preserves the poem’s visual play. Below is a still shorter passage to give you a taste, but you should really check out the whole book Or Consequence. Hogue is one of our best literary artisans of gaps and erasures, but for all her interest in pain and silence, I find enormous light and peace at the center of her work.

from “The Green Card is Not Green”:

A border that divides also connects,
the buffer imagined, arbitrary,
opening where one can cross the line
and become, quite suddenly, other.

I enter a strange country
and myself become strange. Étrangère.
At that moment, my Resident Alien husband becomes Citizen.
We are, between us,
two beings of determinate but shifting identities,
always in transit, self-shifting,
one of us word-less,
one of us defined by prohibitions

expressed in abstractions
all having specific consequences:

You are invited to submit
an application for an extension
of the red tape in which to encase
your green card.

You are not permitted to cross our borders
without an endorsement that the conditions
on your green card have been approved
for removal.

The permeable border is lethal without endorsement.

I wanted to endorse you but the Homeland must authorize your petition.

You will pay x and then go to z. You cannot go to y.

(you will have to call to find this out).

A receipt must be with all questions, and we will tell you that you can not ask questions

in person without an appointment although you can

(you will have to come here to find this out).

If you make an appointment, we guarantee the directions we give you

will cause you to go to the wrong place,

and then we will have to say:

You have to go back to where you came from.

If it is happiness you are free to pursue it but there not here.

If it is unhappiness you must dwell there.

If you cross our borders we will hold you without charge,

for a time to be announced at some time

to be determined in the future.

Poetry at the Border
border, Cynthia Hogue, immigration, language, Or Consequence, poetry, The Green Card Is Not Green