Poetry at the Border: Jane Satterfield

I hereby launch an intermittent feature of this blog–“Poetry at the Border.” Each post in this series will focus on a poet who worries some kind of threshold. Borders of various kinds are always relevant to poetry–crossings in genre, sound, language, and psychological states as well as of national/ cultural identities and traditions–but this topic has assumed so much political urgency lately that it never leaves my mind. 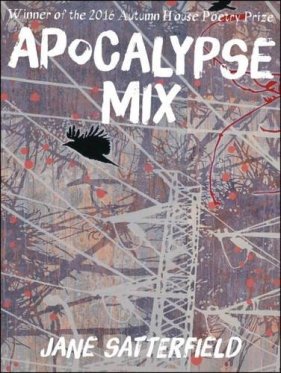 I chose Jane Satterfield to kick off this feature because I’m reading her excellent new collection, Apocalypse Mix, available now from Autumn House. I’ve been following Jane’s work for years, admiring not only her verse collections but her inventive prose in Daughters of Empire: A Memoir of a Year in Britain and Beyond (Demeter Press). (Jane and I share similar transatlantic family connections and semiformalist lyric dress sense, plus she writes about motherhood and rock’n’roll–what’s not to love?) Apocalypse Mix is a book about tricky proximities, the foremost probably being the author’s childhood near Andrews Air Force base, as the daughter of a British mother and an American air force reservist. Many poems address war and migrancy head-on. The porous boundary between past and present is also of urgent interest and, more surprisingly, between human and other-than human animals, in an arresting sequence about the military use of dogs, pigeons, horses, and other creatures during the Great War (“Bestiary for a Centenary”).

I asked Jane to describe a border that’s important to her and to her writing, and explain why. Here’s her response and a poem.

news, I drafted an early version of this poem. I couldn’t shake the memory of the summer day in London in 1995 when I filed for an American passport for my UK-born daughter, and a stranger—a Muslim woman whose command of English was limited—reached across the cultural divide with a kindness that shows what unites us as women, daughters, mothers. As a dual US/UK citizen myself—I’m the daughter of an American service man and British mother of Irish descent—I often look at ways that this legacy plays out in the maternal body and in the larger body politic.

The borders we draw on maps and carry in our minds can empower us or forge division.

Although we gravitate toward tribes that signal safety and belonging, the human story is the story of migration—one where crossing borders both real and metaphorical reshapes our collective destiny.

I had a day’s Underground pass, forms
to be filed for your passport. Soon,
we’d fly back to the States
if your paperwork was in order.
Your father stood watch in the embassy, ready
to call us in when needed, while I wheeled
you ‘round the garden in summer’s
equatorial heat. I shifted the sunshade
over your face.
Down the path, a stranger neared,
shopping bags in her hand, head scarf
adorned with flowers, petals scattering,
light and dark.

In this time before fear was everywhere,
what was the reason she caught my gaze?

Nearly two decades on, my screen flickers with images
of crowds and crusades, flags set aflame,
placards facing off outside the same American embassy:
“Afghanistan’s the graveyard of soldiers!” “If you want
Sharia, move to Saudi!” Rage tilts toward
extremes. Citizens are advised to review
the Worldwide Caution, stay current
with media coverage. The camera pans across
the roiling crowd, one side against the other: Londoners
who’d banish all immigrants, Muslim protesters
garbed in white.
How to speak
of what we share, what separates us?

If there’s a woman in that crowd,
I don’t see her,

§
but I remember the day
I waited with the pram, how you blinked
as I pulled back the sunshade and you tugged
your tiny bonnet, fist clenched unfurling.
In time’s reflecting pool,
water gathers, builds to spill . . . That stranger,
alone, hesitant, reached in to touch your face—
What was her past? A dream of mosquito nets,
acoustic flashings of rain? The cardamom pods
she’d bought for her mother?
She saw
a mum with a pram and neared, touching
the face of a stranger’s baby, smiling
as she said beautiful,
as she said blessed.

*There are some indented half-lines in this poem that WordPress won’t indent–apologies for the vagaries of blog formatting–but I trust this poem’s acoustic flashings still scintillate.

Jane Satterfield has published five books, including Apocalypse Mix, winner of the 2016 Autumn House Poetry Prize. She is the recipient of an NEA poetry fellowship, the 49th Parallel Poetry Prize, Ledbury Festival Poetry Prize, and more. With Laurie Kruk, she is co-editor of the multigenre anthology Borderlands and Crossroads: Writing the Motherland (Demeter Press). Satterfield is married to poet Ned Balbo and lives in Baltimore where she is an associate professor at Loyola University Maryland.