“How are you doing so much emotional work in September?” I demanded of my friend and office-hall-mate Deborah Miranda on Tuesday, after I’d read this. She’s an intermittent blogger, like me, but lately posts have been pouring through–here‘s another powerful story, from just this morning. I think she laughed and said something like “it comes when it comes.”

Over on my side of the hall, it’s stalled. I’m really struggling with being back to a rigid schedule. I worked hard during summer and my sabbatical, too, but most of the deadlines were self-imposed. The core of what I’m doing now is also rewarding: I’m teaching an upper-level seminar on modern American poetry, a poetry workshop, and a composition course. My students seem exceptional even by local standards. My classes are each full to the brim, but the “brim” is fifteen–cushy almost anywhere. Yet all this means my days are chock-full of classes, preparation for classes, office hours, meetings, committee work, grading, reference-writing, and a million flavors of professional correspondence. Deadlines are external and difficult to defer. I’ve been racing flat-out for several weeks now to meet my obligations to other people. I write the committee report Saturday after class prep, with more preparation and grading to do on Sunday.

I’m still exercising some and I halt whatever I’m doing if someone I love needs me. When my brain stops functioning in the evening I watch some TV or read The New Yorker before bed. But carving out any other downtime seems impossible, and I feel desperately sad about writing projects I finished recently that need to be pushed along towards publication. I just don’t have the focus, or the hours.

You know this story, and I do, too. The moral is: make time anyway. So I’m submitting the damn strategic planning white paper today, and I’ll refuse to take further leadership in committees. I’ve almost stopped looking at Facebook. After a hard stare at my schedule, I realized I can take Tuesday and Thursday mornings to work at home, where it’s quiet, so I imposed that regime this week.

Tuesday morning I labored over ms queries–a rational effort, the most urgent item on my to-do list. I got a few out. It felt terrible. Then my sister called with worrisome news about my mother’s recent blood tests and I got a couple of magazine rejections. I ran out of time to get my head together for my three o’clock class–it was fine, but not as energizing as the session could have been. The next day I pulled a muscle in my back at the farmer’s market, loading up the car with vegetables for the week. Back pain always seems so symbolic to me: I’m unbalanced, carrying too much.

So here I am on Thursday morning, when I’d promised myself to prepare queries for the other ms, blogging instead. This is an inefficient way to spend free hours, maybe, but writing just feels better than submissions. What’s the right math here–some aimless drafting, some submissions, some revisions, as the day seems to call for? Or should I focus hard-won time with laser intensity on what would really feel best in the long-run–delivering mss somehow, some way, to the world?

I don’t have the answer, but I can tell you the most fun I’ve had this week was preparing for my poetry workshop, very inefficiently. I was pondering how to get introductory students to see the possibilities of lineation, and I ended up retyping a Lucille Clifton poem: “the beginning of the end of the world.” For an unnecessary hour, I played out variations: what if I wrote out the poem as a single grammatical sentence, in prose (see below)? The poem turns out to be an open-ended proposition. Maybe the roaches are holy emissaries, not “dark” invaders, and our refusal of their presence will destroy us–she doesn’t quite spell that out, but it’s a resonant speculation, in this moment of hateful anti-immigrant rhetoric. Maybe the roaches break faith with us because we’re faithless–where might the commas go in that last bit, anyway? Would parentheses be better? I tried other versions, too–long lines to highlight the buried litany, for example (although WordPress won’t let me paste in hanging indents). Clifton’s poem is way better than my bowdlerizings but I learned the poem more deeply through the exercise, and I think discussing my revisions was illuminating for students, too. No answers. Just questions, and poetry, and play…I may often wish my life weren’t such an experiment, but pondering uncertainty seems to be the best survival strategy I’ve got.

Maybe the morning the roaches walked into the kitchen, bold with their bad selves, marching up out of the drains not like soldiers—like priests—grim and patient in the sink, and when we ran the water, trying to drown them as if they were soldiers, they seemed to bow their sad heads, for us, not at us, and march single file away; maybe then, the morning we rose from our beds as always, listening for the bang at the end of the world; maybe then, when we heard only the tiny tapping and saw them dark and prayerful in the kitchen; maybe then, when we watched them turn from us, faithless, at last, and walk in a long line away… 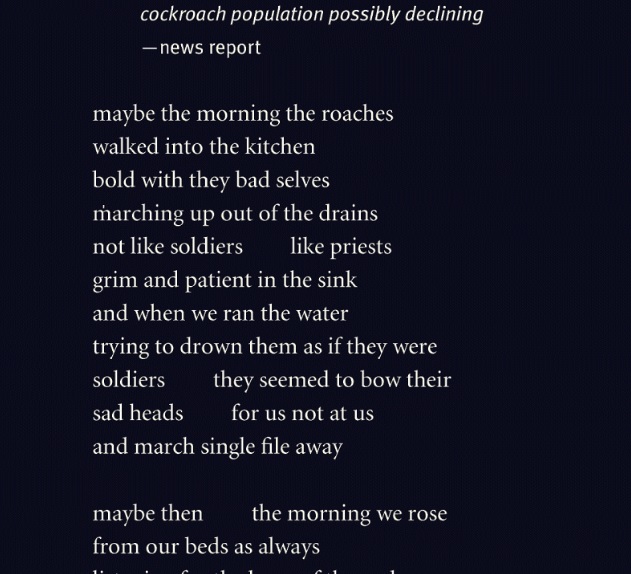