I have been misbehaving again. Instead of finishing  a draft of my critical book this month–it’s close to done–I seem to have shelved it temporarily in favor of writing fiction, a genre I haven’t done much with since college. Ten thousand words last week alone, so the project is thundering along, and I’m having SO much fun. I guess that’s good?–it fits my rule of productive procrastination, anyway. If I can’t work on what I’m supposed to, I just work on something, and things seem to get done on the end. Plus, experiments are generally worth making; even if the project withers, you learn by the attempt.

In the meantime, Radioland was just accepted to the Virginia Festival of the Book–it looks like I’ll read there on Thursday March 17th, but I’ll add the details (and some other upcoming things) to my events page when they’re confirmed. And I am THRILLED to see the first two reviews available online:

Both reviews are insightful and generous, but it’s interesting to reflect on their differences. Writing for a NZ magazine, Cresswell stresses the book’s Aotearoan content, but also the theme of dislocation. I see that place has become a big subject for me, but often in a perverse way, as I write about imaginary, damaged, or vanished locations, so I’m gratified to read her thoughts on the subject. Michaels, on the other hand, cocks her very good ear to themes of distance and intimacy, especially as they arise in parent-child relationships. Since I started writing about voice and medium in my scholarship a decade ago, I’ve been obsessed with them. Communication was the original organizing theme of the collection–although poems do take on a will of their own after a while. A poetry book is a broadcast that too often goes just one way, out into an unresponding world amid a blizzard of other signals. It’s wonderful when listeners out there in radioland actually beam their responses back!

I’ll be doing the same soon. Sometime around the turn of the year I’ll put up some thoughts about 2015 reading. I’ve taken on way too many commitments lately in wild sabbaticalesque enthusiasm–I’ll have various columns and reviews to cross-post in coming months–but I do think there’s a kind of writerly karma involved in buying, reading, and talking about books that move or help or entertain you, just as you hope others will do for you.

However, I also need to dial down the static enough to enjoy my family and the holidays. I haven’t been exactly centered, oscillating between light and dark moods as I am between writing projects. I’m tuning in to political outrage, too, and then overcompensating by shutting out most media for days, horrified by the headlines, afraid if I open my own mouth I’ll just start yelling. This can be a weird, hard time of year and I send good vibes out to the many, many folks having a rougher time than I am.

So, lest I give publicity to the forces that just enrage me, I’ll just say: merry cauliflower to you, beets on earth, and I hope you get some time with a good book soon. 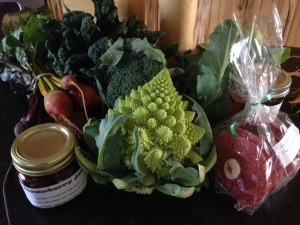