“First came Vachel Lindsay and gave a ‘reading’ (if you could call it that) of his poem in the Washington and Lee Library. One of them sounded to me like a hog calling. Then came Carl Sandburg whom I liked much better.”

This is from an obscure memoir called Mrs. Ecker’s Lexington, 1918-1929, edited by Dr. Charles W. Turner, billed on the title page as “Retired Professor of History Department of Washington and Lee University,” and printed in Roanoke by the Virginia Lithography & Graphics Company in 1990. Grace Glasgow Dunlop was born in 1878 in Georgetown; in 1906 she married John Ecker and they had four children. Ecker died of tuberculosis around 1914, and as Grace Dunlop Ecker, a smart and energetic young widow, reflected some years later, “When war finally came to my own country it was a veritable mental boost for me, for it changed my train of thought and having no man of my own to send I threw myself, my soul and body, into the work of the Red Cross.” Eventually, however, with Washington “swarming” with war workers, and everyone suffering from food and coal shortages, she decided to move her family to Lexington for a while.

Her memoir of the town I live in is lively and interesting, full of funny detail about the Virginia Military Institute and W&L, where I work. Comical tensions between Presbyterians and Episcopalians; the lassitude of local summers after students clear out; Robert E. Lee idolatry–they ring true to the place I first came to know decades later, in 1994. While she lived first in a rented house on Letcher Avenue, between the two campuses, she later built a home around the block from me, on what became Barclay Lane. I’m pretty certain the painter Cy Twombly lived there later.

I’m not precisely sure why I’m doing so much side-reading in local history, except that poems keep coming out of that exploration. But it’s fun to stroll around the neighborhood with Chris in the evening, book in hand, and figure out which houses various eccentric Lexingtonians lived in by Ecker’s idiosyncratic descriptions. There are several references to literary culture here, too. I love the sound of the Wednesday morning Reading Club. Mrs. Derbyshire read dramatically from Sandburg, Lindsay, Amy Lowell, Robert Frost, and others, while her listeners darned stockings.

Ecker had taste and a fierce appetite for culture, as well as a longing to lead, to be useful, in a way her life rarely allowed. She isn’t an entirely sympathetic character. She thinks wrongly, for example, that she’s a good employer to a servant she keeps referring to as “fat, freckled, yellow Lucy,” who is homesick for D.C. and eventually walks out without notice. Ecker failed to understand her own prejudices, but she was a thwarted person too, a woman whose talents and desires had little enough scope beyond volunteer work and dancing at Hops with lonely cadets. She suffered too many losses, as well–not only her husband’s death and her mother’s but her young son’s too, suddenly, as she read to him on the sofa. 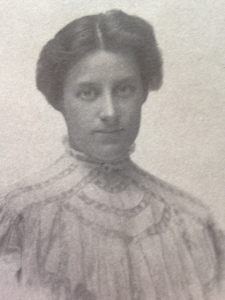 I’m glad she ventured out to hear Lindsay and Sandburg and wish she’d said more about them. The little passage I quote above, though, is followed by a fuller description of another literary event:

“Then on a strange October day came John Drinkwater who had become famous for his ‘Abraham Lincoln.’ I say a strange October day for we had a heavy snow, and I shall never forget the effect of the red and yellow leaves and the evergreen trees among the white snow. The event was to take place in the Doremus Gymnasium at Washington and Lee, the largest place in town. All the electricity was off and when the audience arrived the place was lit with candles and lanterns. When Mr. Drinkwater took his place at the reading stand, which was trimmed with greens and red candles, his first remark was he felt like a Christmas tree. He had to leave before eight the next morning, which he did not relish at all, to keep his engagement at Sweet Briar, nor, I heard did his English taste relish the salted butter served at the Dutch Inn, but I understand that he considered the campus of the University very beautiful and impressive.”

It sounds magical, doesn’t it?–despite the horror of salted butter. Ecker moved back to Georgetown not long after, grieving her child and ready for another change of scene. She died in her nineties, in 1973. You can find her better-known Portrait of Old George Town on Project Gutenberg (John Drinkwater’s Lincoln play is there too). I’m glad to have visited with her. All these familiar places are becoming even more haunted than they used to be.