Women on the radio

It’s about loneliness.
A woman from Birmingham tells us
about the time she was lonely.

When I left Birmingham
the Bull Ring was still ashen.
I remember it in the slush:

a lady in a pink and gold sari
with a grey anorak over the top
dragged blue and white plastic bags.

Nothing sounds more hangdog
than a lonely Brummie, I think,
no vowels could be droopier.

My dad used to mimic them,
I’m from Birmingham I am.
We’d tell him he was way off.

The woman on the radio says
the time she was lonely was bad,
she actually literally wilted.

Her cadences announce
what I least expect: home
how I might miss it.

I’ve been meaning to post this lovely poem for a while. When in England this past June and July, I picked up a bunch of books and magazines–Carrie Etter, Sarah Jackson, Rory Waterman, and other poets publishing there now are pretty great. I’ve also put myself on a catch-up reading course in 21st century verse from the British Isles, although in the haphazard way of a curious person rather than in the urgent way of a professor preparing a syllabus (I’m on sabbatical–have I gloated enough about that yet? Of course not!). I took out the few recent volumes our little library owns that I’d never read (how is Selima Hill new to me?). I also ordered books based on selections I liked in a couple of anthologies (Niall Campbell’s Moontide is magical–there’s a podcast by him here). And the new Irish-themed issue of Poetry just arrived, so more self-education awaits. Even on an endless sabbatical I couldn’t read all the published contemporary poetry in English, of course, but it’s fun to try.

Zayneb Allak doesn’t have a book yet–she’s finishing a creative dissertation at Nottingham Trent University. One of her critical chapters concerns my book Heterotopia, a Liverpool-themed collection she found by accident but that resonated with her own complicated experiences of place. She grew up partly in Liverpool, partly in Iran, and her family now lives in Birmingham, as “Broadcast” suggests. I love the lines “Nothing sounds more more hangdog/ than a lonely Brummie,” and I also love that her home-longing is triggered by sound, an accent heard over the radio. Given that my next book, Radioland, uses broadcast as a motif, it sounds like our obsessions continue to harmonize.

New Jersey and New York accents, hated as they are by many, sound homey enough to make my heart skip a beat. So do Liverpudlian voices. My mom doesn’t have a strong Liverpool accent; she grew up in that city but was mostly schooled out of scouse intonations, which carry strong negative connotations over there (but not in the U.S., where everyone thinks “Beatles!”). I had assumed this prejudice was past-tense until I sat with an English couple while traveling a couple of years ago; they were very friendly until they found out where my mother was from, after which they shut up firmly and kept their eyes downcast. I know the bias concerns class and probably politics. I’m too much of an outsider to understand the nuances, but I think of Liverpool when I hear people express prejudice against the varieties of drawl associated with the southeast U.S. The unfair cliche is that a southern accent sounds stupid, uneducated. I know many southerners who code-switch, dialing up the twang for local friends and muting it in, say, academic circles. I personally mourn the loss to the soundscape, but I’m sure I would code-switch too–and probably did alter my own accent unconsciously at some early age. My sister, for example, sounds more New Jersey than I do. And my mother says I had a British accent before I started school.

Zayneb, a generous, capable sort of person, arranged some events for me in Nottingham and Liverpool. It was wonderful to meet her and I’m rooting for lots more poems with complicated accents under her byline in future. For the moment, here’s a picture of her near Nottingham Castle–I wish I could post a recording! 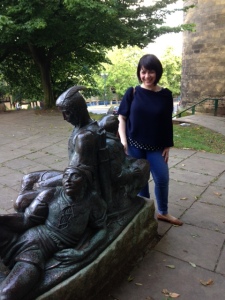 And hey, speaking of little magazines doing good work in amplifying poetry’s signal: thanks to One for featuring my eccentrically-titled “Postlapsarian Salsa Verde” in their new issue. They’re looking for submissions for the next one…

4 responses to “Women on the radio”