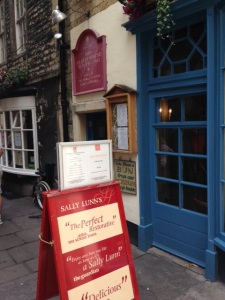 In a Bath Teashop, by John Betjeman
“Let us not speak, for the love we bear one another —
Let us hold hands and look.”
She such a very ordinary little woman;
He such a thumping crook;
But both, for a moment, little lower than the angels
In the teashop’s ingle-nook.

I have it on good local authority that Sally Lunn’s is the only teashop in Bath with an inglenook, so Betjeman’s poetic assignation must have occurred here. It’s the oldest remaining house in Bath, according to the plaque out front, and all the guidebooks say one must eat a bun there. We finally obeyed on Wednesday with my visiting cousins, and it was full of Americans–including one of my daughter’s high school teachers, to their mutual shock. It’s a lovely old three-story place with exposed timbers and a low curving plaster ceiling over the narrow stairs.

I didn’t scan for an inglenook because I wasn’t sure what qualified as one, but I just looked it up now: it’s a warm recess by a fireplace. The alliteration in Betjeman’s last two lines gets even more interesting when you learn than angel and ingle both come from Old English via Scots or Irish Gaelic–angel also means fire. I know almost nothing about Betjeman–although he was a poet laureate in the UK, he’s a small-ish figure in the US version of the British canon–but I admire the way character transformation links to linguistic change in this poem. How paradoxical, though, that speaking threatens to break the romantic spell. Language seems to debase love and identity here, and at the same time it carries the flame across great spans of time.

I’m saying goodbye now after a month in Bath, having never figured out what the local accent is, because everyone seems to be from elsewhere–or, at least, changed by long stays in other places. A month isn’t a significant sliver in forty-seven years, so I’m not claiming to have been re-written by the experience myself, as Bath itself has been re-mapped by Romans, medieval kings, and then the grand plans of the Georgians. But I made some wonderful connections here and elsewhere in England. I rendezvoused with family members I hadn’t seen in nine years. I talked and tippled with poets whose work was new to me and picked up more books and magazines than I should have, considering the luggage problem. I did some writing, too, and I suddenly have some new ideas for my youngest poetry manuscript, the core of the book that will come after Radioland. So now I’m off to a picnic lunch by the Avon, and tomorrow morning, very early, we’re dragging our cases onto a coach to Heathrow. Even though I’m returning to work and muggy heat and a small town without Thai food or Roman ruins, I’m feeling nearly ready for the translation.