At first she slept in a bassinet by our bed, keeping us awake with weird barnyard noises: grunts, squawks, clicks, snorts. After a couple of weeks we started pushing the bassinet across the room, and even into the hall outside our door, just so we could catch a little rest between feedings. Our tiny baby, after all, was quickly growing fat and happy—newborn jaundice fading into a golden Buddha sweetness. Five weeks after the birth, somewhere in late April 1997, we pushed that bassinet right into her own bedroom and all three of us, relieved by the peace, slept our first seven-and-a-half hour stretch. A talented sleeper, Madeleine dreamed through the night from then on in.

And now she’s been accepted early-decision to Wesleyan.

We’re sad at the prospect of pushing the bassinet all the way to Connecticut in late August 2015, but it’s what you’re working for all along, right? One minute she’s playing school with stuffed animals, then she’s challenging the ridiculously early bedtime you got away with imposing for a surprisingly long time, then it’s boyfriends and a school trip to Italy and AP Physics and boom, you’re ordering college sweatshirts for Christmas. 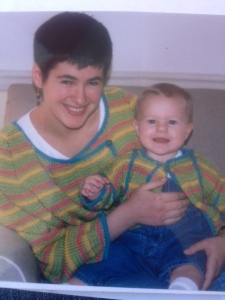 After a fall season of application-essay-writing, sleeplessness, and intense suspense, we’re pretty happy here. Madeleine has recommitted herself to watching as many shows and movies directed by Wesleyan alum Joss Whedon as possible between massive homework sessions. Chris is reading over a book contract from Iowa University Press for a prehistory of superheroes based on his blog. My workload for exam week is ridiculous, and grading is the least of it; there’s a ton of department-head-work to do as well as miscellaneous meetings. Some of them are tiresome, like weighing in on new registration software; some are hard but important, like search committee work; some are even kind of fun, like meeting with the head of Special Collections about resources for my winter African-American Poetry course, and presenting on a panel in honor of a new essay collection, Forging a Rewarding Career in the Humanities (that’s 8:30 this Thursday morning in Hillel 101, if you’re local).

But you mind the busy-ness less when your family is cheerful and your fall 2015 sabbatical has advanced one term closer. Here’s hoping peace is contagious this season. The poem below will be in my next collection, Radioland. Warm thanks to The Southeast Review for publishing it early this year.

It was not the sick shudder of a small plane, windshield
scratched, scenery blurred, or the snarl of a finger sliding
beneath an envelope flap. It was more like waking up
after a doze on a plastic raft, noticing the shore is far off
and the sky deep plum—not terrifying yet, just enough time
to paddle in, pack up blankets and slowly rusting chairs,
children who are no longer small. Or it was like not
hearing a toddler babble about toy sharks beyond
a half-closed door, realizing you’ve been not hearing her
for a few minutes now. She suddenly became fourteen
and it’s dinner and she’s describing the pregnant girl in Earth
Science as she doesn’t eat her page of cod, scribbled with herbs
and strips of wine-poached pepper. I sort of admire
her, she says. She’s getting really fat now. You correct her,
stupidly: Not fat. A seven-month-belly is hard and full
of baby. And then rising tones behind her fully-closed
door. Daughter and friend emerge to ask, How far along
until you start to show? It turns out to be another
teenager, not your sensible girl whose slender left hip buzzes
with texts until stars vibrate in a perfectly dark,
dry night sky like messages, like fish in deep
water or the unnecessarily frightened passengers
on a small plane about to land. A shell’s secretive
murmur reminds you of the sea but is really your own
blood echoing through nearby coils. Sound reflected,
not by a mirror. By the whorls of your daughter,
loaded with mysterious cargo and about to launch.