Our daughter said to us recently about our first cat, Gladys: “All I really remember is her voice, the funny things you used to pretend she said. At the time I wasn’t sure what powers grownups had. I thought maybe you were actually translating.”

Gladys, a petite gray-and-white creature we adopted in the early nineties, had a tough New Jersey accent and was intensely sarcastic. We must have ventriloquized her often, before we had kids who grew up and made our house noisy, because I can remember my friend Rosemary, over for dinner, laughing and saying directly to the little feline on the floor, “Oh, Gladys. You’re so funny.” Gladys was kind of hilarious, an improbably convincing and voluble joint id. Funnier than I am solo, anyway, although Chris manages to entertain without pretending to translate housepets.

My memory of Gladys’ voice resonates oddly with one of the books I just finished teaching: James Merrill’s Ouija-inspired poetic sequence. “The Book of Ephraim” is, among many other things, a romantic story: the characters JM and DJ (the latter based on Merrill’s partner David Jackson) spend their evenings together spelling out messages from their wickedly charming spirit-guide Ephraim. They also have houseguests and affairs, swim in the nude and grieve lost friends, and hunker down with their cat Maisie in cold seasons between episodes of glamorous world travel. Ephraim is their collaborative writing project, a folie á deux, and a reliable companion who flirts with them both and flatters them endlessly; his “backstage gossip” has a way of revealing aspects of their human relationship. Together, JM and DJ are witty, cultured, urbane, inventive—a brilliant match. They are also unequal in power and imperfectly happy. For example, when Ephraim tells the rich and increasingly successful writer JM that he’s done with reincarnation but DJ requires a few more tiresome rounds on earth, is the struggling novelist David Jackson consciously or unconsciously expressing certain mundane relationship frustrations? Maybe so, but as Merrill writes, “even the most fragmentary message [is]/ Twice as entertaining, twice as wise/ As either of its mediums.” In Ephraim, they’ve given voice not only to their individual hopes and doubts but something bigger, weirder, dreamier than either man alone.

That “something” might be defined as their marriage, although Merrill and Jackson weren’t allowed to marry then. However, just before I taught this poem last (2009), same-sex marriage was legalized in Connecticut (2008). Like many other Americans in my generation and older, I’m moved and delighted but deeply surprised that social attitudes and even laws are changing rapidly now—even in Virginia, the attorney general recently announced his disapproval of our same-sex marriage ban. I certainly see a shift in social attitudes in my classroom. I remember teaching “The Book of Ephraim” to an earlier group of Washington and Lee students, maybe seven or eight years ago. Someone made a homophobic remark and I told him sharply that his comment was offensive. That’s one of very few times in my career that I’ve cut off a student—usually I’ll try a counter-question or make space for his fellow-students to issue a challenge, because I think that’s ultimately more mind-changing, to hear disapprobation from peers rather from that suspiciously feminist-looking teacher up by the blackboard. To his credit, though, the student thought about it for a few weeks then came to me and apologized. He was just nervous and trying to be funny, he told me, but he realized his joke had been—what was the phrase he used? Narrow-minded? Unkind? Wrong?

Now, if any of my students are troubled to be studying a poem concerning homosexual love, I can’t detect it in their conversation or their papers. Maybe this reflects a new decorum rather than a deep change in attitudes. Still, it’s an improvement. There’s more room to talk about it as a love poem, a cold war poem, a mystical poem, or in other productive ways—better work is possible when you don’t have to justify the material’s place on the syllabus to start with. And this group of students, mostly sophomores, handled Merrill’s challenges pretty brilliantly.

Meanwhile, at home, we have a kitten, Poe, who is practically rabid with cabin fever and prone to pouncing on us demonically with hip-high leaps and extended needle-claws. Surely I have a poem to write about this crazed black cat with a Gothic moniker, but for the moment Chris and I are just trying to get his voice right. Our second cat, Flashlight, got drowned out by the uproar of jobs, child-raising, and book-publishing, although after the kids went to bed, she did enjoy dropping decorum and swearing like a sailor. When I channel Poe now, he sounds Homer Simpsonish, but when Chris-as-Poe cracks wise he sounds, disturbingly, just like Chris. How will the next decade of our marriage sound? I’m not sure, but it’s bound to be bigger, weirder, dreamier than any one human being babbling to herself. 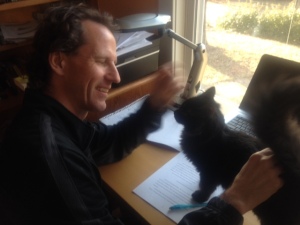