Refueling? Yeah, not so good at that

Following a link in Marly Youmans’ blog a few weeks ago, I read an interview with Joss Whedon that stuck like beach sand to sunburn. He describes a work pattern of constant, compulsive production, often on multiple projects at once. Even in rare blocks of downtime his mantra is “fill the tanks, fill the tanks, fill the tanks” by consuming books and plays voraciously. I’m a Whedon junkie so I’m glad he’s a workaholic, and I enjoyed and identified with most of what he said, but the very idea of his life makes me sore, especially since watching Much Ado About Nothing and developing a bad case of house-envy (he filmed at home). First observation: he mentions no intermissions for packing up a sick mom’s condo or worrying over which summer camps to book for the kids (the hardest part of being a parent is trying to juggle zillions of decisions that could be trivial but that add up to a human being’s childhood—when you’re a Libra, no less). Most of my “downtime” is spent addressing other people’s needs. But best to leave the caretaking issue aside; I know I’m lucky and don’t regret my choices.

I’m still bothered, though, by Whedon’s sheer capacity for work, even though others have accused me of the same proclivity. I drafted this post on vacation, feeling out of sorts because I wasn’t sensing fuel rising in the metaphorical tanks. We visited Wrightsville Beach near Wilmington, North Carolina. I’m the family vacation planner and this year we wanted to do something low-key within a six-hour drive; we could squeeze out six days if we combined the travel with a southward detour to pick up my son from camp; and I always like to see an area I haven’t visited before. I won’t be volunteering for the regional tourism bureau anytime soon, but it was an interesting area. The ghost tour in Wilmington’s historic downtown was a blast. I could develop a serious dependency on fried pickles and Britt’s Donuts, so I’m glad my proximity to them was temporary. Eating Thai curry in a fancy little hut at Indochine was lovely. Walking on the wide pale beaches, discussing fiction with my son while bobbing in waves, sipping rosé on the hotel balcony while a guitarist crooned Van Morrison covers down by the pool—all good. I kept telling myself so.

I also told myself: it’s okay to be out of sorts. There were the usual trials of family vacations like picking up after kids in a small shared space, non-cooperative weather, traffic jams. From home, English department personnel upheavals and their consequences chased me via email—I started writing about those worries here last year, and the situation has only gotten more complicated since. I’m waiting on medical tests too, nothing apocalyptic, but one of the weird symptoms of the summer has been a racing heart that doesn’t seem to correlate with anxiety so much as create it (it’s hard to relax in the warm sun when your heart is palpitating madly). And my mother-in-law was hospitalized with pneumonia as soon as we crossed the state line, though she’s much better now. So if I was tired and down, that’s not unreasonable. Bad weather breaks eventually.

Whedon’s metaphor might be the problem. I don’t actually believe that’s how it works: pour art in, then rev your own art machine. For me, writing energy is unpredictable. Sometimes the more you burn, the more you have. Sometimes you break down and lie around in the junkyard, for better or worse, vaguely hoping you’ll be road-ready again after a breather. Sometimes “rest” is the cruelest thing you could do to yourself (see Charlotte Perkins Gilman’s “The Yellow Wall-Paper” and imagine it as a writer’s blog). And then there’s all the worry around the work: keeping any kind of a spotlight on one’s writing can be a more than full-time job, and it’s a frustrating and demoralizing one. I alternate between committing to the publicity game and repudiating it, the way many authors do, I guess. Social media present whole new ways of feeling insignificant, even when the writing itself goes well (now imagine Gilman’s narration as a series of Facebook posts with decreasing rates of “friend” response).

In short, I don’t even know where my tanks are. But I have an idea that fried pickles are going to appear in a poem one day. Also those walks I took to the top of the barrier island: little waves were carving off chunks of sand in sweeping curls just behind me and I kept jumping, thinking I was being followed. And the buckeye butterfly that landed on my head like a benediction. Not fuel, exactly, but the world whispering to me, if I could turn off the engine long enough to hear it. 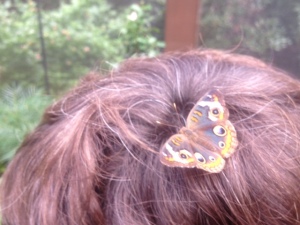 2 responses to “Refueling? Yeah, not so good at that”