Credo/ for the new year

Forest view: ranks of slender trunks shoot up vertically in a bid to catch a bit of direct light. The rare anomaly, the difficult-to-spot wolf tree, spreads its limbs horizontally, luxuriously, because it occupied the meadow before all the others grew up around it. I learned the term reading Paula Meehan’s poem “The Wolf Tree” in Painting Rain, where it becomes an emblem for how the past survives in the present—all times coexist always, if you know how to look. Her instructions for finding wolf trees remind me of practicing art or meditation: scanning for a wolf tree involves a counterintuitive process of relaxing one’s focus, becoming fully present, and waiting “until the moment when your attention snags—”

Paula Meehan’s poetry is a wolf tree for me in the woods of contemporary verse. I know it’s better than much of what’s out there, but I’m not jumping to claim that it’s the best and the strongest and should crowd other poetry out of my attention. I just know that when I stare at it, it spreads out branches. It helps me see the forest in a new way, in psychedelic layers.

Meehan came across the idea of the wolf tree while reading “Slashes” in Adrienne Rich’s The School Among the Ruins. Adrienne Rich’s poetry is enormously important to Meehan and to me, but I read it most intensely in the eighties and early nineties, and my attention never snagged on this 2004 collection. I barely understand “Slashes,” really, although I can reason my way through it with the help of Rich’s notes. The title connotation of violence haunts the poem, but she directs our attention first to the slash as punctuation mark used in dates. Various images of connection and division throughout the poem suggest the strange duality of the slash: it can mean “or” (refusing to choose, setting up equivalence) and “and” (forging a joint between terms). From the middle of the poem (WordPress keeps erasing the spacing, but the words come through, at least):

For Rich, in this poem at least, the past can be evoked but not told, witnessed but not explained.  I appreciate the ethics of that position but the poem doesn’t help me live. Rather than being beautifully warned against misrepresenting experience, I’d rather have a clumsy explanation of how to get it right.

I talked to Paula Meehan in Dublin last August but ran out of time to look for wolf trees on the grounds of Malahide Castle, where she first spotted one. A week or so later found myself in Coole Park, Yeats territory, trying for a quiet moment in the woods as my kids smashed their noisy way towards the lake. I never got my timeless interval of blissful communion, but some quality of the light snagged my attention and I snapped one picture of the lit-up greenery. Long after we downloaded the photos and arrived home, I scrolled through, chose this one for desktop wallpaper, blew it up on my screen, and finally saw it: a wolf tree, right in the middle of the shot. 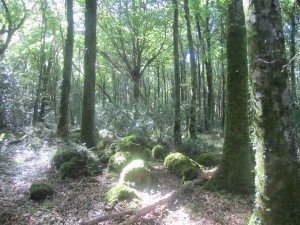 Maybe some uncanny force guided my eye and hand; maybe I liked the angle because I unconsciously perceived the break in symmetry; maybe the whole thing’s a coincidence. Barring a personalized revelation courtesy of some God/ fairy spirit, I’m choosing “and” over “or,” horizontal over vertical. I believe not in a higher power, but in other powers: not in kneeling and praying, but in watching and listening. Light is still/always everywhere.

3 responses to “Credo/ for the new year”