There’s a mountain I talk to on a fairly regular basis–really, two mountains, Big House Mountain and Little House Mountain. From the window of my study, one shoulders the other nearly out of view. On a clear day, sometimes I can see the difference. Today both are occluded by dull white mists.

Instead of trying to engage a sulky landscape in conversation, then, I’m browsing the last in-print issue–really, two issues–of Crab Orchard Review, the first magazine ever to pay me for a poem. I have an essay in the general half, 21.1. The company is brilliant: Kaveh Akbar, Kim Bridgford, Chelsea Dingman, Annie Finch, Afaa M. Weaver, and many others. The prize-winning essay, “Slight” by Kristine Langley Mahler, is a stunner. A spooky poem by Emily Rosko, “A Phase,” seems to be about a lost friend, as is my piece, “Women Stay Put.” I have no objectivity at all about this essay, but I can testify that whatever the end results are worth, it was really hard to write. I’m weaving together meditations on place, friendship, and what it meant to labor, in the mid-nineties, alongside an extremely talented poet who occupied a lower rung in the local academic hierarchy than I did. “Women Stay Put” is a hybrid of personal and critical essay–a memoir of Claudia Emerson that also analyzes her first collection, Pharaoh, Pharaoh.

From that essay, first drafted in January, 2015: “My life is patterned by love and meaningful work, but winter’s dark days make me low and antisocial. Lavender clouds pile onto House Mountain.” I talked to the mountain a lot back then, too.

Thanks to Allison Joseph and Jon Tribble for including me. And I love that the issue I’m in is followed by a themed issue called “Weather Reports,” full of pieces that look backward, like mine, but also others testing literature’s predictive powers. When the issue goes live, look, for instance, for “Spell to Bring the Fall” by Ann V. DeVilbiss as well as poem by Michael Hurley, in which the title slides into the first line: “A Persimmon,” begins “when ripe, can be used to predict the weather.” The poem instructs you to split a seed and examine the shape inside for foreknowledge of winter snow and wind.

I predict we’ll have more grieving weather soon, eventually followed by hope weather, although they’ll keep cycling. I predict I’ll photograph these trivial texts from Claudia then finally delete them from my phone, and that no one will ever ask to read them, although people will keep loving her poems. I predict I’ll see the mountain again one of these days, and it will reflect the sunrise, like a mirror.

“I’ve quit hoarding,” Kimiko Hahn said at her reading, “and now collect myself.” I, on the other hand, was hoarding good lines–hers was one of many I collected last week in a little notebook bound with blue thread. My tattered Moleskin is beginning to fill with quotes and drafts and lists and spiral doodles–and I gathered a variety of each at the second annual Poetry by the Sea conference, as I began to describe in my last post.

Some highlights: Jon Tribble, in a panel on publishing, reminding us that a good poetry book drives you to keep turning pages. Listening to him (an editor who personally reads a massive number of mss annually), I scribbled almost illegibly, with my sprained right wrist: “How does every poem reward you for being there?” That’s a good thing to think about, the flip side to the need for suspense in poetry, a subject I wrote about here a few months ago.

Alicia Stallings charged me up similarly by reading poems about the migrant crisis in Greece–work that could not have felt more urgent. Ange Mlinko commented during her lecture, “At Sea,” “how frequently the classroom is a site of humiliation”–a sobering thought for someone who wants to foster inclusive spaces for pondering art and speaking adventurously. I was pleasurably startled by a reading pairing Mahogany L. Brown, one afternoon, with Gregory Pardlo–an unlikely duo. Poems in Pardlo’s physical voice were funnier than I’d realized–especially some new work about raising children–and when Brown’s teenage daughter accompanied her mother’s verse by singing a cappella, I wasn’t the only listener who broke out in goosebumps. In another event, Marilyn Taylor made me laugh out loud and Joshua Mehigan’s intense long poem, “The Orange Bottle,” riveted my attention almost painfully. There are many, many ways to make people want to keep listening.

I also kept recording scraps of conversations, mostly with other women, about the life hinges we’re occupying–worrying over ailing mothers and struggling daughters. “Valerian tea for anxiety,” reads one page. I think I jotted that prescription in the meditation garden, looking out at the seam between the blue sky and the blue water. I have notes from Jane Satterfield’s memoir panel and also about the brands of cute-yet-comfortable shoes she was wearing. I drafted a couple of poems and a couple of flash fiction pieces, too, although I wasn’t enrolled in any workshops. The combination of gorgeous ambient language with a borderworld landscape–that’s just irresistible.

One intermittent list consisted of advice I quilted together more deliberately. Tell me something good, I kept asking, about approaching the age of fifty. I’ll leave you with some answers, as well as an invitation. If you’re in the D.C. area, please consider coming to the launch of of the annual Joaquin Miller series, this coming Sunday, June 5th, in Rock Creek Park (5200 Glover Rd NW, Washington, DC 20015). I’ll be reading along with some young contest winners, and I believe there’s an open mic, too.

Till then, the pluses of middle age:

The last one I’m feeling. Carefree fruitful balanced clarity, hmm–here’s hoping I figure that stuff out before September’s wave drags me out deep again. 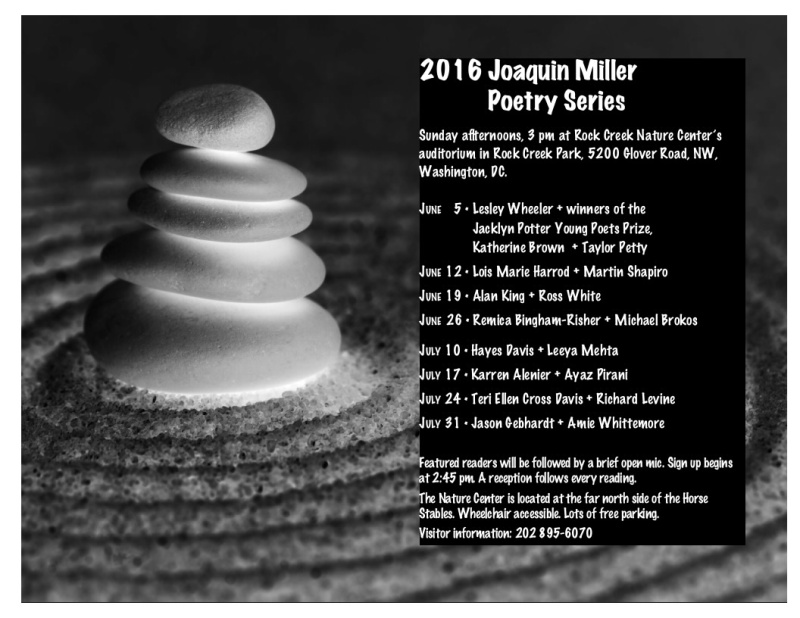