For a workshop on Tuesday, Election Day, one of my undergraduates submitted a poem based on the day he hid in a closet during a middle school shooting. A different student said there had been a shooting in her school, too; another described an active shooter just last week in the high school her sister attended; a fourth said a friend had died in the Parkland massacre. Stunned, I responded with something like, “Are you telling me that four out of the fifteen of you have had a near miss with a school shooting?” Then two more raised their hands. Six.

Gun violence in the US is insanely, horrifyingly prevalent; every new mass shooting refreshes the horror and also increases the number of Americans directly affected. A good friend’s father’s retirement center was recently in lockdown because of an active shooter. And when I described the workshop discussion to a friend who had come over to watch the election returns, she said, “Oh, that happened to me, too,” describing hiding in a basement when a shooter attacked the university where she was earning her PhD. She always has a plan, now, for how to hide if another shooter comes through.

Nor is our remote small town any kind of a protective factor. We have offices in Washington and Lee’s historic colonnade, which is very much the heart of the embattled Confederacy for certain die-hard white nationalists, who are angry about the slightest possible changes to their sacred sites. Some of whom distributed KKK fliers on campus just a couple of weeks ago. Any place in the US is vulnerable to violence from well-armed disturbed people, but we have an extra source of risk without the security resources of larger universities.

In short, teachers now have dangerous jobs, students are always vulnerable to random violence, and nowhere is safe. So all together, now: let’s write pantoums! Seriously, teaching poetry during any of the crises we’ve been negotiating lately could seem frivolous, but I’ve been feeling the opposite. My poetry classes keep turning into spaces for analyzing and reflecting on disaster in ways that feel more emotionally useful than, say, reading the news.

Some of that is chance resonance between syllabi and world events. Well, sort of chance. For a different course, my mid-20th-century US poetry seminar, we’re studying the usual characters–O’Hara, Brooks, Rich, and others–but I replaced a session I used to devote to Vietnam war protest poetry with several readings from an anthology I’ve really come to admire: Words of Protest, Words of Freedom, edited by Jeffrey Lamar Coleman. It’s been clear especially since Trump’s rise that we remain in the middle of Civil Rights battles that defined the country fifty years ago, or perhaps in a never-ending backlash against them, so I knew it was time to represent Civil Rights poetry more robustly on my syllabus. Coleman clearly did his research, because while the book contains many famous poems by our best US poets, it also features more obscure work culled from little magazines of the era, and the friction is riveting. I’ve been so impressed by how eagerly and intelligently my students are working through material that is even more relevant than I intended. The KKK leaflets were distributed here on a Friday, the Pittsburgh synagogue shooting occurred the next morning, and for Monday, the assignment was to discuss poems about the KKK bombing of a Baptist church that killed four young girls in Birmingham in 1963. That synchronicity has definitely brought urgency to our discussions.

But is it synchronicity, now, or just the permanent daily texture of the world? Since I started drafting this post, there’s been another mass shooting. The election cheered me, but the administration immediately punched back with more ways of undermining the law. Poetry gives me access to other minds confronting related crises thoughtfully–it’s personally useful to read Giovanni, Hayden, Brooks, and many others as they work through anger and hope and grief–but it’s also providing small collections of us with a nonpartisan angle of discussion on the human toll of violence, the way it ripples out in space and time, and I’m grateful for that, too. It makes me feel warmly connected to other anxious human beings working through serious questions, and I hope it does the same for them.

Here’s a Lucille Clifton poem from the anthology, from a group of responses to the murder of Dr. Martin Luther King, Jr. My students led a brilliant discussion about it: who is included in the “we” who held the “meeting” for which this poem offers a riff on the usually less-than-gripping literary genre of minutes? How are the “we” and the “you” related? What does it mean to be saved? Is the tone of the last few lines wry, disparaging, or sympathetic? 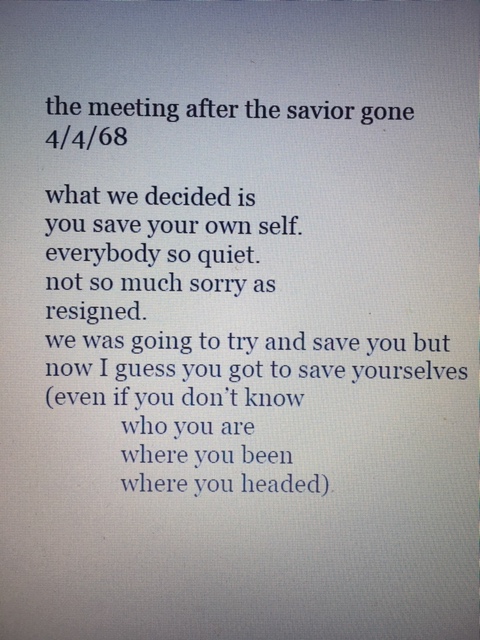 We all had slightly different answers, and listening to Clifton reading the poem here (minute 7:14) can change your mind yet again. It’s centering to think about it when your heart needs rest after other kinds of activism. Who are we, anyway? Where are we headed?