Okay, so the red wolf is not a separate species but a hybrid of gray wolf and coyote. That kind of makes me like them more. What’s celebrated as local is mixed, impure. 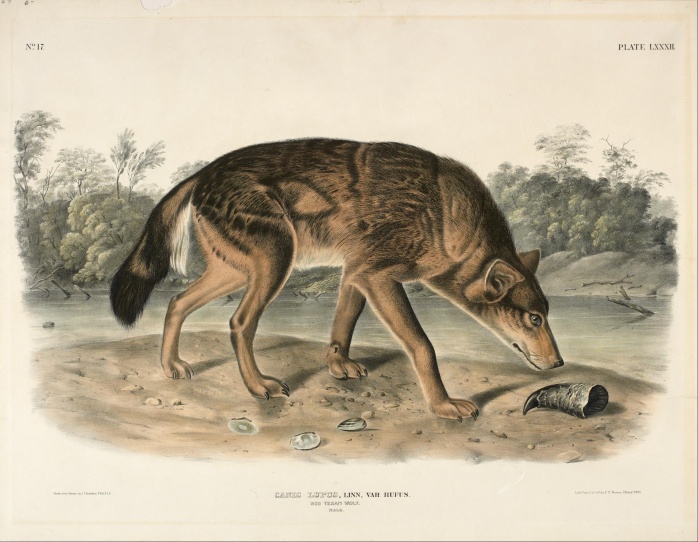 Making a fetish of purity–racial, ideological, national–is not just hateful. It’s dumb. No person is unmixed, no policy, no poem. That was an important problem for me to think through when I was writing the chapter on lyric collaborations for Voicing American Poetry, and it’s why I just revisited related questions in my “process” blog for Modernism/ Modernity, “On collaboration (or, she do the blog in different voices).” It’s also an important fact to remember as a citizen, watching or avoiding all the good and bad news out there. We’re all connected. The Obamas and Clintons speak for my America and so, frighteningly, does Trump. Freddie Gray’s tragedy is my tragedy. The failure of law to address his death is my failure.

Everyone forgets or represses or denies those links, sometimes. Reading that article on wolf species in today’s paper brought to mind the poem below, another outtake from Radioland, first published in Valparaiso Poetry Review in 2012. I know I’d recently read some monorhyme sonnets and thought hey, that’s cool–but I can’t remember whom I’m echoing here. I didn’t quite get the form to work–only the twelve middle lines close on the “n” sound–but I ended up liking the way lines 1 and 14 call to each other across a distance.

I do remember writing it when, on a family vacation in North Carolina, we went on “safari” in the Alligator River Wildlife Refuge. This meant a bunch of cars following rangers at twilight. Bullfrogs sounded loudly among the reeds, but our guides never managed to stir up a wolf howl. I lingered last, though, and after everyone else drove away, finally heard their weird cries. Listening felt like connection–like responsibility.

Their cries rise sweet and high like questions, cross
each other’s tracks in the air, the wildest din
you have ever heard./ Some rangers caravan
with tourists down a gravel road. No one
can see the wolves: they hide among the pine
and cedar, rusting in the pocosin,
trailing the white-tailed deer. While everyone
parks, two guides hike closer to the breeding pen
and howl encouragement. The canids listen,
but why should they answer us? Some insects moan
to sharpen the silence; secret frogs complain.

The group gives up. It’s nearly dark. Our van
loiters as the other tail-lights vanish. Open
windows. Then we hear them. They ask, and ask.

Little flecks of inspiration and creativity