“The derecho felled my father, I mean my maple tree”: that’s a line from my forthcoming book, Radioland. My desk at home faces a large old maple, and beyond that Myers St., and beyond that House Mountain. A storm cleaved the tree, however, during the summer of 2012, about a month after my father died. Half the wood smashed down on our porch roof. A few weeks afterward, a pipe burst and our house flooded so catastrophically we had to move out for a couple of months while the major repairs were underway. In one of those irrational associational chains, I connected both events with my father’s death. On a tree expert’s advice, we let the broken maple struggle on for a few years. I wrote with an eye to its golden wound, watching the exposed grain darken, waiting for each April’s reduced leafing, until recently, we called it quits. The tree was dying and we feared the next storm would bring the rest of it down on us, or on our neighbors.

eys of Radioland, a collection full of my father’s death, that derecho-torn maple, and other disasters. I’ve been writing these poems for years, and in fact pulled together the first version of the book in April 2013, during a two-week retreat at the VCCA. I just found this snapshot of the winnowing/ arranging process on my phone. If there’s a way to lay out the draft of a poetry book without making a mess on every available surface, I don’t know it.

The book has undergone several transformations since then. Just a few weeks ago I took some advice from my editor at Barrow Street and put a different poem in front of the pack. It was the right call, but the change meant rereading critically to see how the book’s arc was jostled into new meanings. Everything alters a little: the story, the progression of feeling, the rhythms made by recurrences of forms and styles and subjects. I discovered patterns in diction I hadn’t caught before, particularly the overuse of “noise” and “static,” because that’s one of the main questions this book asks–how does a person sift through the noise of experience and find a true signal worth amplifying?

A year ago I wrote about the process of working on this collection here, and my ominous last question was, “What am I not seeing?” At this point I’m mainly proofing for layout problems–spacing, italics–but I did give the ms yet another rereading this morning. Each time, I realize something new. Radioland contains many sonnets, some of them portraying the dissolution of my parents’ marriage. They start off arranged in fragmentary couplets but become more integrated as the book turns in a hopeful direction. What’s missing, perhaps, is one last fourteen-liner, a love poem to the spouse whose help got me through. Instead, he’s lurking unobtrusively but companionably in a few first-person-plural pronouns. I wonder what other holes and excesses might be invisible to me now, but obvious to readers?

In the meantime, the tree guys and their cherry-pickers just pulled away, leaving only a stump to be ground later. The next question for spousal contemplation: what should we plant in the gap? 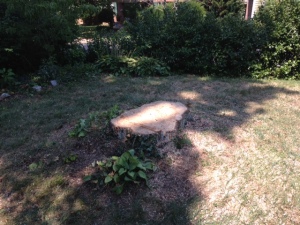 ← Elephant blessing
Women on the radio →